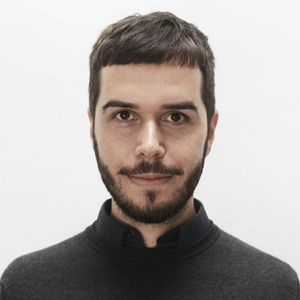 Dr. phil. des. Daniel Irrgang is research associate at the “Inequality and Digital Sovereignty” research group at Weizenbaum Institute for the Networked Society. His research focusses on visual depictions of information from a media theory / cognitive studies perspective (“diagrammatics”), interface as well as general HCI paradigms and media archaeological studies, among other fields. Currently he is working on a critique of transhumanist and Californian Ideology narratives. Since January 2018, Daniel is coordinator of the research seminar “Critical Zones” with Bruno Latour at Karlsruhe University of Arts and Design.

Daniel holds a PhD (des.) in media studies (Berlin University of the Arts – UdK Berlin) with a thesis on diagrammatics, expanded mind and expanded hermeneutics in connection with Vilém Flusser’s concept of “technical image”. He studied communication in social and economic contexts (M.A.) at UdK Berlin.

Daniel is editor, together with Alice Soiné and Florian Hadler, of the journal Interface Critique and, with Siegfried Zielinski and Marcel René Marburger, of the book series International Flusser Lectures.

As part of the exhibition “Without Firm Ground—Vilém Flusser and the Arts,” organized by ZKM Karlsruhe, Berlin Academy of Arts, and the Vilém Flusser Archive, he published, together with Siegfried Zielinski and Peter Weibel, the tri-lingual edition Flusseriana—An Intellectual Toolbox (Minneapolis 2015). Daniel is a fellow on the research project “Archaeology/Variantology of the Media” and co-edited vols. 4 and 5 of Variantology—On Deep Time Relations of Arts, Sciences and Technologies (Cologne 2010 and 2011), including the German anthology (Berlin 2013). In collaboration with a rotating editorial team, he published the proceedings of the “Forum on the Genealogy of MediaThinking” (Berlin 2013–2017).

From 2008 to 2016, Daniel was a founding member of the communication agency AFKM, Berlin.