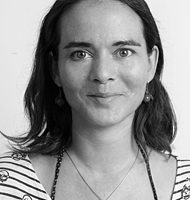 Stephanie Neumann, born in Berlin Volkspark Friedrichshain, grew up as an urban native. After her apprenticeship as photographer and her studies in Digital Media (Dipl.-Inf., FH) she worked as a concept developer at agencies in Berlin, Frankfurt/Main and New York.

She furthermore worked as a lecturer and research scientist at Brandenburg University of Applied Sciences. As a Master student Stephanie studied at the Hasso Plattner Institute (HPI) in the field of Human-Computer-Interaction and at Potsdam University of Applied Sciences in the field of Interface Design. With her thesis »Fummel da jetzt nicht rum!« she completed her Master’s degree (M.A.).

In February 2013, Stephanie joined the Design Research Lab as a research scientist and PhD-Candidate at the Berlin University of the Arts. She is part of the Blended Prototyping project.